The power of correlation functions

During my physics studies, I got to know several mathematical tools that turned out to be extremely useful to describe the world and to analyze data, for example vector calculus, fourier analysis or differential equations. Another tool that I find particularly useful for my current work as a neuroscientist and which is, however, rarely mentioned explicitly are correlation functions. In the following, I will try to give an intuition of the power of correlation functions using a couple of examples.

.What are correlation functions?

To put it in very simple terms, a correlation coefficient measures how similar two signals (

) are after being normalized. Different from correlation coefficients, correlation functions are not single values, but functions of two input signals

. This can be a correlation function

of a time lag,

, or of a distance in space,

, except for a normalizing factor.

The value of a correlation function at a given value of

are when one of the signals is shifted in time by

or in space by

To make the result of this operation more clear, here are two simple examples, with signals

(gray) as noisy sine waves that are in phase (left) or out of phase (right):

While the cross-correlation function peaks at a time lag of

for the synchronous case, the peak is shifted to

for the out-of-phase case. The value at a time lag of 0 is proportional to the correlation coefficient: a high value for the left side, a value close to zero for the right hand side. Also note that the correlation function used averaging over the full signal duration to get rid of the noise.

in Matlab or Python

Computing the correlation function is actually straightforward in Matlab or Python. Pay attention to subtract the mean of the two signals (e.g., B = B – mean(B) in Matlab or B = B – np.mean(B) in Python), because the functions expect normalized input.

It is a good but a bit tedious exercise to write one’s own cross correlation function in a basic programming language. Usually the normalization at some point can cause headaches.

In microscopy, there’s often the problem to map two images onto each other. The following examples are two average images of the same brain region, recorded at different time points and therefore shifted meanwhile due to drift. I included a horizontal line for orientation: 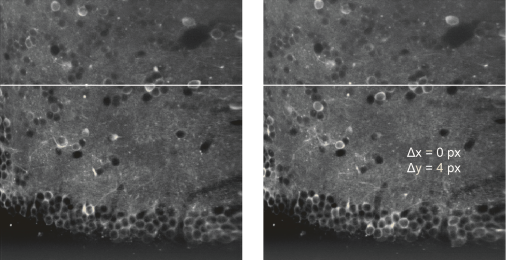 To find out the drift, we can use correlation functions, measuring the similarity of the two images for all possible shifts, with the result that the shift in x-direction is 0 pixels, whereas the shift in y-direction is 4 pixels (here in Matlab):

Here, I calculated the correlation function using fast fourier transforms, taking advantage of a simple mathematical property of correlation functions. I could also have done the same computation with the built-in function xcorr2(movie_AVG1,movieAVG2) in Matlab, which is however much slower and requires subtraction of the respective mean from the images.

Similar algorithms are used for most image registration functions in ImageJ, Python or Matlab.

To go one step further, one can also compute a local instead of a global shift, for example if there are any deformations of the images that result in local deformation fields.

A more interesting application of the same principle of local deformations is a method referred to as particle image velocimetry (PIV), which has been developed in the field of experimental fluid mechanics. Using a sequence of images, correlation functions are used to extract local flow fields, as well as sinks and sources of the observed transport phenomenon. Here is, from work for my Diploma thesis, an example movie of a one-cell C. elegans embryo just before the first cell division, observed using DIC microscopy. I used the granular stuff in the cytoplasm to track the cytosolic flow patterns using PIV (with the toolbox PIVlab). The overlaid yellow arrows indicate the (wildly changing) direction of the local cytosolic flow field:

Peri-stimulus time histograms (PSTHs) are a much more basic analysis tool that is commonly used by electrophysiologists to quantify the occurrence of a quantity triggered by certain events. Sometimes, events as ill-defined as the crests of an oscillatory signal are used as a trigger for a PSTH. Using correlation functions gets rid of this mess by measuring how much a quantity is affected depending on the quantitative history of the trigger signal.

In electrophysiologal work published in 2018, I used correlation functions to measure the phase relationship between an oscillatory local field potential (LFP) signal and an oscillatory component in a simultaneous whole-cell recording (for details, check out a part of figure 7 in the paper):

Auto-correlation functions are not only a tool for non-intuitive experimental methods like FCS, but also perfect to quantify periodicities in a time series. For example, if there is an oscillatory behavior in a swim pattern of a fish, in the firing of a neuron or in the spatial density of clouds, autocorrelations can easily quantify this periodicity.

As another interesting use of auto-correlation functions, the fluctuation-dissipation theorem gives an idea how spontaneous fluctuations of a system close to thermodynamical equilibrium can predict the linear response of the system towards external perturbations. It’s a bit discouraging for biologists to understand that this theorem can hardly be applied to biological systems, which live far from thermodynamic equilibrium and which show responses that are rarely linear.

4 Responses to The power of correlation functions